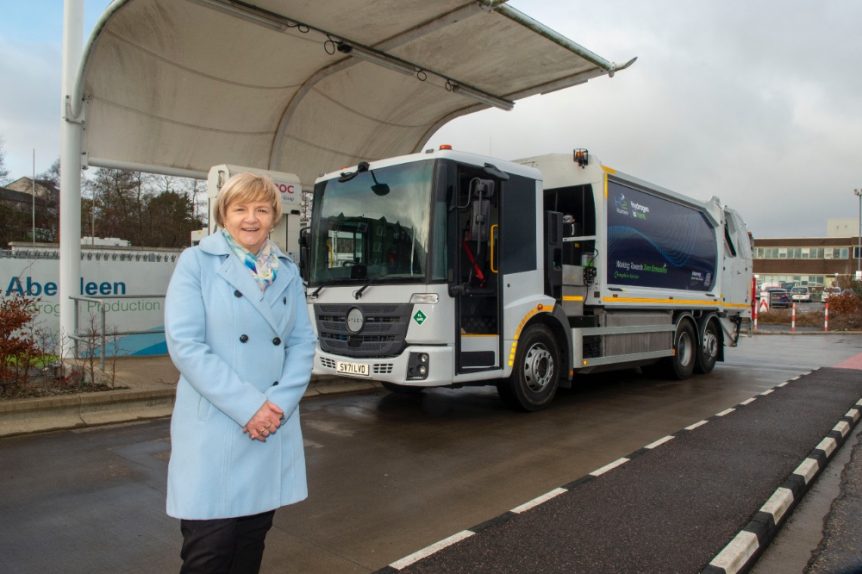 The UK’s first hydrogen-fuelled waste collection vehicle has been revealed in Aberdeen, in a move which continues to accelerate the city’s thriving hydrogen economy.

While typical waste trucks are powered by diesel and petrol, the new waste truck will use green hydrogen from existing refuelling infrastructure in Aberdeen.

The truck will start collecting waste and recycling around the city from early March and will be the first hydrogen-powered waste truck to become operational in the UK. It will initially cover wheeled bins in Garthdee, Kincorth, Bridge of Don, Newhills, Woodside/Hilton, Mastrick, Milltimber, and Rubislaw before moving to mixed recycling and bulk bins on other routes.

These journeys will not only result in estimated emissions savings of over 25kg CO2e/litre across a year, based on a diesel truck on similar routes, but will also collect data which will allow further rollouts of hydrogen-fuelled waste trucks in the future.

“Adding a waste truck powered only by hydrogen is another important step forward and builds on the zero emission buses and other public sector vehicles that are already here in the city.”

Aberdeen City Council city growth and resources convener Councillor Ryan Houghton said: “Our work has been ground-breaking and the people of Aberdeen can be proud that our city is proving to be a catalyst for demonstrating how public sector fleet can be decarbonised, setting an example for other regions in the UK and beyond.

“The launch of the new waste truck comes hot on the heels of the new joint venture company with bp to deliver the Aberdeen Hydrogen Hub, and all of these projects cement our position as a pioneering, climate positive city and an important step forward in our hydrogen journey.”

The hydrogen fuel cell waste truck is one of seven which will be deployed across seven pilot sites in northwest Europe, including the Netherlands, France, Belgium and Germany. Each truck will be tested in a range of environments from rural areas to city centres, demonstrating that hydrogen waste trucks provide an effective solution to reduce emissions from road transport.

The arrival of the waste truck follows a host of major hydrogen announcements by Aberdeen City Council in recent months, including the world’s first hydrogen double decker buses becoming operational, new funding secured for hydrogen projects and most recently, the appointment of international energy company, bp, as strategic commercial partner for the development of the transformative Aberdeen Hydrogen Hub.